The pickup segment is heating up. Recently, almost every major automotive company engage in creating something new and something different than the rest of the competition. Therefore, in the following years, we can expect to see numerous brand-new vehicles, form typical full-size/heavy-duty models, to the compact and mid-size pickup trucks.

Moreover, even the brand’s famous for something completely different will enter the race. For example, take a look at Hyundai and its Santa Cruz concept. Of course, there will be a lot of challenges in every part of the class. Naturally, the Honda Ridgeline will get a couple of unibody rivals. Also, there will be few off-road-ready trucks, which will compete with the Ford F-150 Raptor, and Chevy Colorado ZR2. So. let’s see what we can expect in 2021 and the near future.

One of the main news regarding this truck is that the Tundra truck will come with a company’s brand new rear-drive TNGA-F platform. Also, for 2020 and 2021MY, the famous model will go through a serious redesign.

Moreover, the interior will be refined as well, and you can expect Toyota’s latest infotainment and other hi-tech features. Also, don’t be surprised if you see Lexus LS’s twin-turbocharged V6 engine under Tundra’s bonnet.

Ram will introduce its mid-size pickup by 2022. The company wants to build a vehicle similar to the likes of Chevy Colorado and Ford Ranger. Still, at the moment, we don’t have official info about the name of Ram’s future truck. There are a couple of options.

According to the reports, right now, the favorite is the name Mojave. But, let’s not forget that the Ram might use the famous Dakota nameplate for the future truck. All in all, whatever it will be called, the upcoming Ram Mid-Size Pickup will share the same platform with the Gladiator.

Ford’s F-150 Raptor will definitely get some fierce competitors in the following years. One of them will be Ram Rebel TRX. The Ram’s truck is expected to make a debut in 2021. As the recent presentation revealed, the TRX will come with 4WD setup, and supercharged V8 engine, which will produce around 700 hp.

The same unit can be found in the Challenger SRT Hellcat, and Charger Hellcat as well. Also, the company will deliver the off-road-oriented truck in an available Rebel TR trim.

General Motors will restore the famous Hummer model. But, the new incarnation will be an all-electric vehicle. At the moment, the automaker didn’t provide much info regarding the new truck.

All we know is that the Hummer will have a powerful engine, which will produce 1,000 hp, and impressive 0-60 mph in 3 seconds acceleration. But, until the GMC doesn’t confirm these specs, they remain only rumors.

Nissan Frontier will enter the new generation very soon. The design language will be very similar to the latest Titan model. Also, the forthcoming truck will use a 3.8-liter V6 engine, which produces over 300 hp.

Furthermore, the new unit will provide much better fuel-economy figures than the current 4.0-liter mill. The debut date is expected in the fall of 2020, while the sales start next year in February.

Although Blue Oval’s performance director, Mr. Salenbauch stated that there’s not going to be a new Ranger Raptor for the US market, the recent reports from Michigan suggest otherwise.

Well, if the truck goes into production soon, the customers in the States won’t get the diesel-powered Ranger Raptor, that’s certain. More likely under the hood of North America market version will be a twin-turbocharged 2.7-liter 335 hp V6 mill from the Edge ST model.

The Japanese automaker is preparing a special edition of the Tacoma truck. Toyota stated that the forthcoming pickup would be “sporty and outdoorsy, with a touch of nocturnal mischief.”

Pretty strange description, if you ask us, but we will see what will happen with this model. The brand-new Toyota Tacoma will make a public debut on US soil in a couple of days, at the ongoing Chicago Auto Show. The sales will start by the end of 2020.

Back in 2018, the VW Group presented the Atlas Tanoak pickup concept at NY Auto Show. The concepts show what the Ridgeline might look like if the Volkswagen engineers took over and remade it.

Even though the German automotive company is not yet officially confirmed the production of Atlas Tanoak, there’s a big chance that we’ll see it sometime in 2021. The pickup will ride on the MQB platform, and it will be perfect for the customers who seek a mid-size truck with the comfort of a crossover.

The South Korean company is working on its first pickup, which will be known as Hyundai Santa Cruz. Back in 2015, we had a chance to see a concept for this truck at Detroit Auto Show. Now, it is almost sure that the concept will enter the production in the next couple of years.

The main rival of the Hyundai’s upcoming pickup will be Ford Courier. Besides, both of these vehicles will ride on a unibody chassis. Also, automotive experts assume that both pickups will favor payload capacity and fuel efficiency, over the power and towing. According to the reports, the arriving truck will use a diesel-fueled inline-six powertrain. The Santa Cruz will be assembled in the automakers’ factory in Montgomery, Alabama.

The FCA’s compact pickup will hit the streets in the following months. But, there’s a slim chance that the customers in the United States will see the Fiat Mobi in the dealerships.

Namely, the forthcoming truck will be primarily sold on the South American market. Under the hood of the FCA’s new model will be a 1.4-liter 4-cylinder engine, good for 88 hp. Also, the second option will be a 1.3-liter turbocharged mill, which produces 109 hp.

The California-based carmaker will introduce the Neuron T/One shortly. At the moment, there is no much info or specific details regarding this electric pickup. Still, we know that the upcoming vehicle will share the platform with another EV from Neuron’s future all-electric lineup. Also, the main reference for the exterior design will be Tesla’s famous Cybertruck.

A brand-new generation of the VW’s Amarok pickup truck is set for release in 2022. The new model will be based on the next-gen platform, the same one that will be used on an upcoming Ford Ranger. According to the Volkswagen Group, there will be no hybrid engine development for this model.

One thing is for sure, the Amarok will use V6 diesel and gasoline powertrains, depending on the market. The current version uses V6 TDI, which produces 255 hp and 428 lb-ft of torque. However, with the tuners such as ABT, the total output jumps to 302 hp. We expect similar power from the 2022MY. But, the company will surely try to improve performance and offer even more power under the hood.

We already take a sneak peek into Ford’s electric plans and know that the Blue Oval will enter the electrification process. It all starts with a gasoline-electric-hybrid model. The F-150 Hybrid will probably be able to work as a mobile generator while losing only a tiny portion, or none of the towing capacity and hauling. Moreover, the leaked spy photos reveal the plug-in capability, which will allow covering short distances in electric-only mode.

Ford won’t stop just with the launching of the F-150 Hybrid. Moreover, with a little help from Rivian, following the investment of a half-billion-dollar in the Plymouth, Michigan-based EV startup, the Blue Oval will develop an all-electric variant of the F-150 as well.

This model will be based on the next-gen of Ford’s pickups, and it will deliver impressive performance, and the driving range as well. The electric F-150 will have a towing capacity of 10,000 pounds, and a driving range of at least 200 miles. The release date is scheduled for early 2021.

Around the same time when we saw for the first time Tesla Cybertruck, the Fisker revealed a concept for their very own pickup truck. According to the presentation, this range-extended model will have a combustion powertrain, available for charging the batteries. But, the approximate release date of the Fisker Electric Pickup is still unknown. 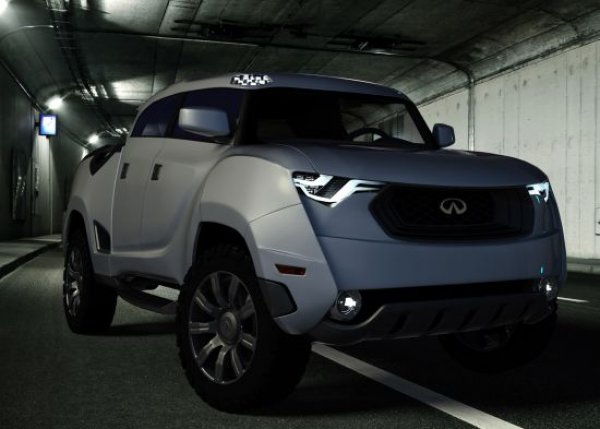